Release from Berkeley Lab, Berkeley CA — The installed price of distributed solar photovoltaic (PV) power systems in the United States continues to fall precipitously. This is according to the latest edition of Tracking the Sun, an annual PV cost tracking report produced by the Department of Energy’s Lawrence Berkeley National Laboratory (Berkeley Lab). 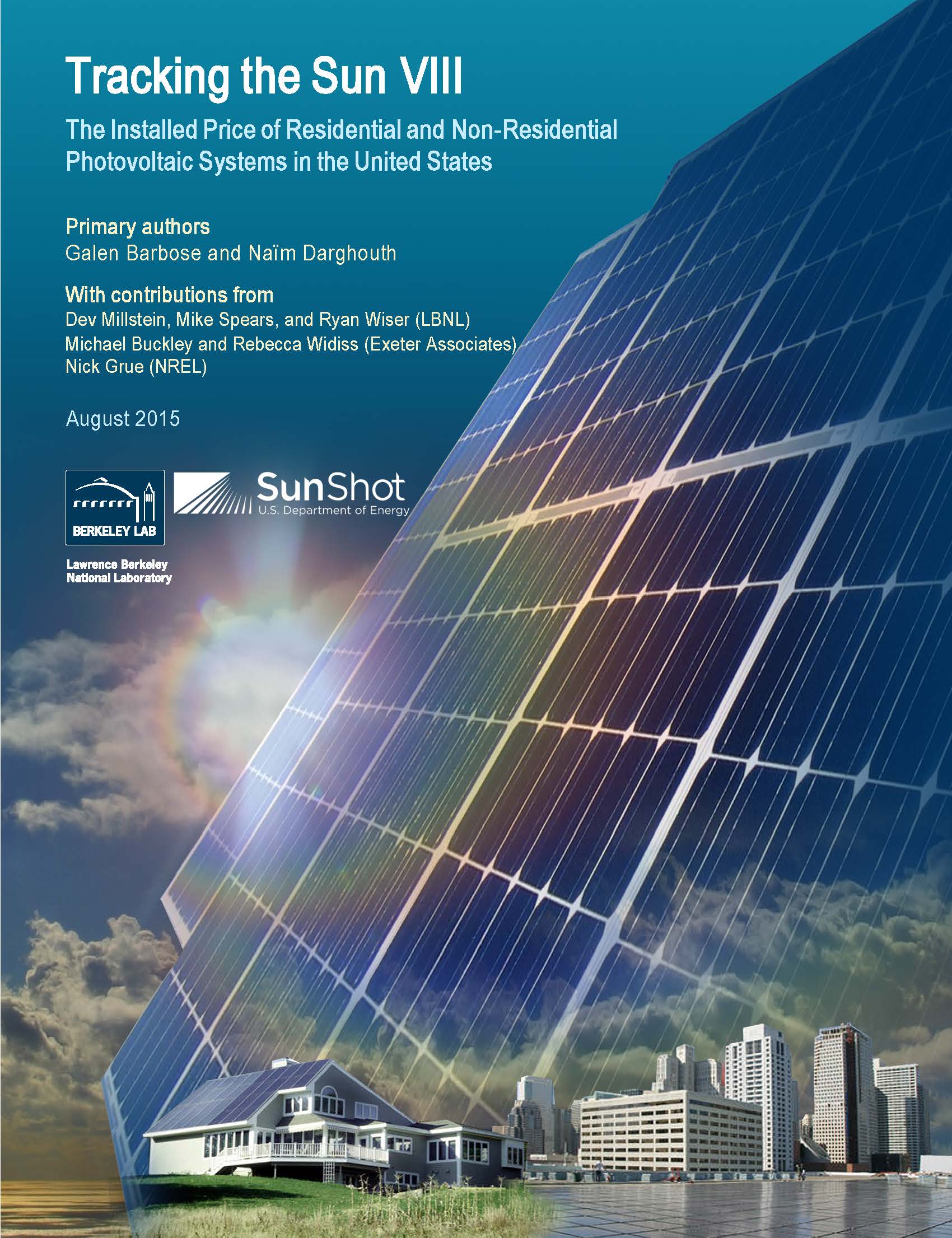 Installed prices for residential and small non-residential systems completed in 2014 were $0.40-per-watt (W) lower, and prices for large non-residential systems were $0.70/W lower, than in the prior year. “This marked the fifth consecutive year of significant price reductions for distributed PV systems in the U.S.,” notes Galen Barbose of Berkeley Lab’s Electricity Markets and Policy Group, the report’s lead author. Within the first six months of 2015, installed prices within a number of large state markets fell by an additional $0.20 to $0.50/W, or 6 to 13 percent, maintaining the steady pace of solar price declines in recent years.

The continued decline in PV system pricing is especially noteworthy given the relatively stable price of PV modules since 2012. The report attributes recent system price declines, instead, to reductions in solar “soft” costs. These include such things as marketing and customer acquisition, system design, installation labor, and permitting and inspections. Attention in the industry has homed-in on soft costs, and the report suggests that these efforts are partly responsible for recent price declines.

The report also highlights the tremendous variability in PV system pricing. Among residential systems installed in 2014, for example, 20 percent sold for less than $3.50/W, while another 20 percent sold for more than $5.30/W. Similar variability exists among non-residential systems as well. As Berkeley Lab’s Naïm Darghouth, another of the report’s authors explains, “This variability reflects a host of factors: differences in system design and component selection, market and regulatory conditions, and installer characteristics, to name a few.”

Comparing across installers in a number of large state markets, the report finds substantial heterogeneity in pricing, and suggests that “low-price leaders” in these states can serve as a benchmark for installed price reductions that could be achieved more broadly. In Arizona, for example, 20 percent of residential installers had median prices at or below $3.00/W in 2014, compared to the median price of $4.30/W across all U.S. residential systems in 2014.

To varying degrees, these many factors are all found to impact PV system prices. As Barbose stresses, “The fact that such variability exists underscores the need for caution and specificity when referring to the installed price of PV, as clearly there is no single ‘price’ that uniformly and without qualification characterizes the U.S. market, or even particular market segments, as a whole.”

The report, Tracking the Sun VIII: The Installed Price of Residential and Non-Residential Photovoltaic Systems in the United States, is the eighth edition in Berkeley Lab’s Tracking the Sun report series. It is based on data collected from more than 400,000 residential and non-residential PV systems installed between 1998 and 2014 across 42 states, representing more than 80 percent of all distributed PV capacity installed in the United States. The report is produced in conjunction with a number of other related and ongoing research activities at Berkeley Lab and at the National Renewable Energy Laboratory that collectively analyze trends in PV system pricing.

The latest edition of Tracking the Sun, along with a summary slide deck and data file, may be downloaded at trackingthesun.lbl.gov.

A webinar presentation of key findings will be conducted on Wednesday, August 19, at 1:00 pm CT. Register for the webinar here.

The research was supported by funding from the U.S. Department of Energy SunShot Initiative. The SunShot Initiative is a collaborative national effort that aggressively drives innovation to make solar energy fully cost-competitive with traditional energy sources before the end of the decade. Through SunShot, DOE supports efforts by private companies, universities, and national laboratories to drive down the cost of solar electricity to $0.06 per kilowatt-hour.