Shoppers often buy in bulk to save money, and that same principle is gaining traction for homeowners in southeastern Wisconsin looking to add solar power.

A solar group-buy program encompassing the city of Milwaukee and village of Shorewood could result in dozens more solar systems installed here this year.

The program seeks to produce savings for homeowners and businesses by bundling installations together.

This year, the program has expanded to include the entire city of Milwaukee, and it’s working with a new program in the village of Shorewood.

“Since we’ve expanded the program’s outreach focus to the entire city, we’re seeing interest from the Sherman Park neighborhood, the Jackson Park neighborhood,” said Elizabeth Hittman, solar program manager with the city. “Really, folks from all over the city are interested in solar.”

A total of 17 customers have already signed up, helping the group-buy program achieve the 50-kilowatt threshold that results in lower prices for every customer. Another 33 customers have received formal proposals and are considering whether to proceed with adding solar by the deadline, which is late next month.

Among the first to sign up this year was Ben LeFort of Bay View, whose solar system was installed last month.

“It’s an easy, affordable investment in your property,” said LeFort, who said he liked the program’s simplicity and the fact that he’s able to take advantage not only of the falling cost of solar power but also the extra financial benefit created by the group buy.

Quintin Bendixen of Bay View said he has been considering adding solar for several years but jumped at the chance this year thanks in part to falling panel prices.

“The math just wasn’t there last year,” he said. “The panels are cheaper this year and the panels are also more efficient this year, so it’s fewer panels for more energy for a lower price. It’s easier to swallow when the math works.”

The group buy creates bigger discounts for all involved as more people sign up, Hittman said.

Because the program already hit the 50-kilowatt milestone, homeowners are seeing additional savings of about $180 for an average-size system. If twice as many panels are installed, the discounts for a typical system will jump to $270.

On his Bay View home, Bendixen had a smaller system installed, with six panels generating just under 2 kilowatts. A bigger system wasn’t necessary because of steps he and his wife had already taken to make their home more energy-efficient, he said.

“If you take those steps to make your home efficient it’s easier and cheaper to go solar,” he said.

An Illinois program that recently finished in Champaign-Urbana was completed with 82 households and businesses taking part, he said.

To date the biggest year so far for the Milwaukee program was 2014 when it was focused on the Bay View neighborhood. A total of 36 customers signed on that year.

Murphy said the MREA is seeking to set up another group buy that would provide additional discounts or financing help for low- to moderate-income people looking to add solar. “We’re looking for a philanthropic partner to help with it,” he said.

Solar information sessions are planned for 6 p.m. Sunday at Riverwest Public House, and 11 a.m. Aug. 6 at the Milwaukee Central Library. More information is at: www.midwestrenew.org or www.milwaukeeshines.com 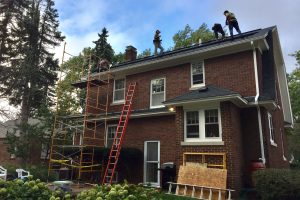 Update: The deadline for proposals has been extended to February[...]